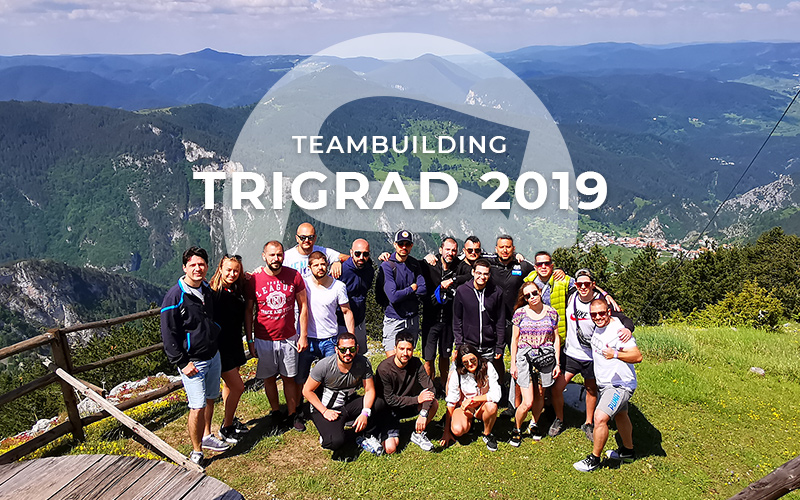 In Stenik, collective gatherings are a common occurrence. After work, on a holiday, or just after a busy day, our team often gets together to relax and share fresh ideas.

Teambuildings are part of our general gatherings and we can confidently say that with each passing one we are upgrading them more and more successfully. What's more, this year's Summer 2019 in Trigrad is named by our team # 1 team-building in the history of Stenik! (...for now)

Thanks to the EnterEvent teambuilding agency

For the purposes of this year's teambuilding, great credit goes to the teambuilding agency EnterEvent. We thank Boyko and Bozil, who participated in the preparation for our "Trigrad adventure" and contributed to the overall experience and atmosphere. We recommend their services to all our friends and partners when organizing their team building adventures.

This year we decided to conquer the heart of the Western Rhodopes, namely the village of Trigrad. We left Sofia with the idea that natural beauty and unearthly tranquility were waiting for us, and when we arrived, the small beautiful village welcomed us with true perfection and gave us more positive emotions than we had imagined!

The beginning of an unforgettable experience

The date was June 13th, the weather extremely sunny, and we were loaded with adventure spirit and eager to drink one beer at 1,300 meters above sea level. We left Sofia in the early afternoon and arrived in the village of Trigrad in the evening. Even before the final destination, we were left speechless by the majestic nature that welcomes guests in the area. Against the backdrop of natural rock formations, majestic coniferous forests and green meadows, we quickly forgot about the routine of a busy day.

After about 4 hours, we arrived at the end point of our destination, a beautiful and cozy hotel, at the end of the village - Arkan Khan. The kind and friendly attitude that the hotel staff welcomed us is rare! We thank them from the heart! We appreciate the attention they payed us and the ease with which we organized the smooth stay of our entire team. And as authentic, home-style and comfortable as the hotel was, his garden seemed most appealing to us. Clear green areas and beautiful coniferous forests spread all around us ! 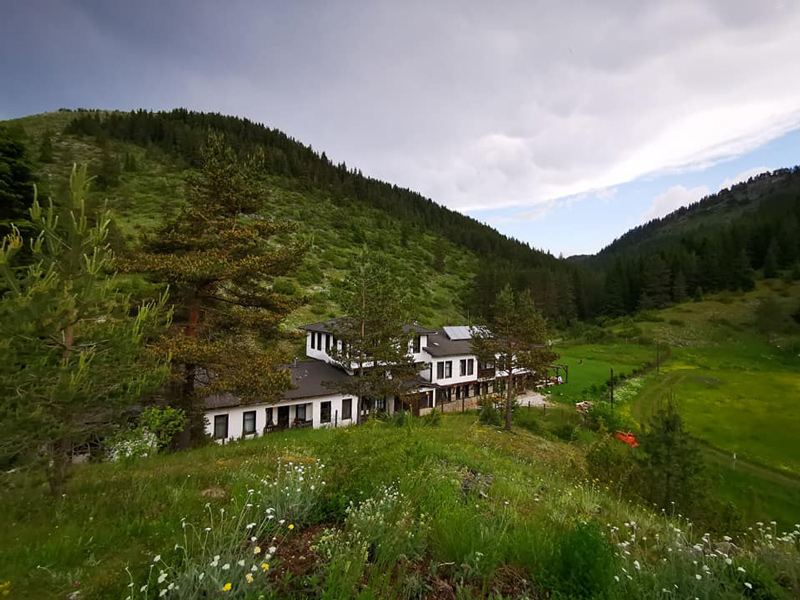 Evening, in the spirit of memories

After a nice break in the garden and a rest after the long way, we had the pleasure of enjoying delicious and traditional dishes for the region. The first dinner was also followed by the first game in which we told and remembered how we met each other and the first impressions we made and left. Each of us shared funny memories and moments, recalling events from different gatherings of ours, some of which provoked a loud laughter and emotions. All that excitement and memories that we shared and recallе made us feel like a real family. 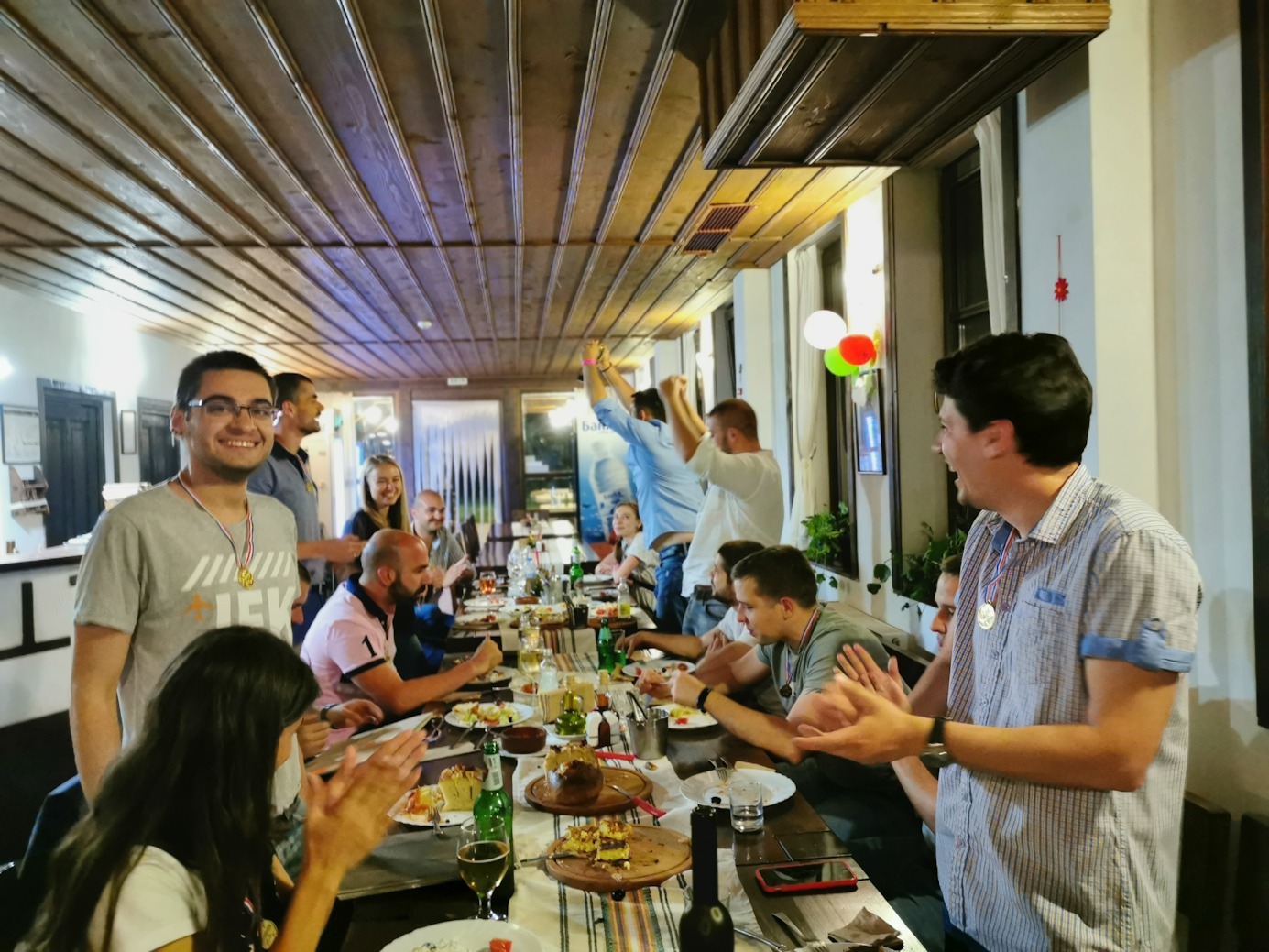 The second day of the teambuilding began with the discovery of inner peace and symbiosis with nature, followed by the inspiring competition among the landmarks of Trigrad ...

Warm Up for Champions!

Rested and energized, we welcomed the morning of the new day with morning meditation and exercise in the garden. Following the instructions of our manager Dimitar, in the beautiful meadow in front of the hotel, each of us began the day with the five Tibetan exercises for health and beauty. These exercises are said to slow down the natural aging process, charge us with positive energy, boost the immune system, tone the muscles and improve blood circulation, soothe the nervous system. Followed by several yoga exercises and a brief meditation, the morning ritual energized and encouraged us, preparing us for the day ahead. We knew that there was going to have games and our program was full, but none of us suspected what was ahead. The second day was planned for a real adventure! 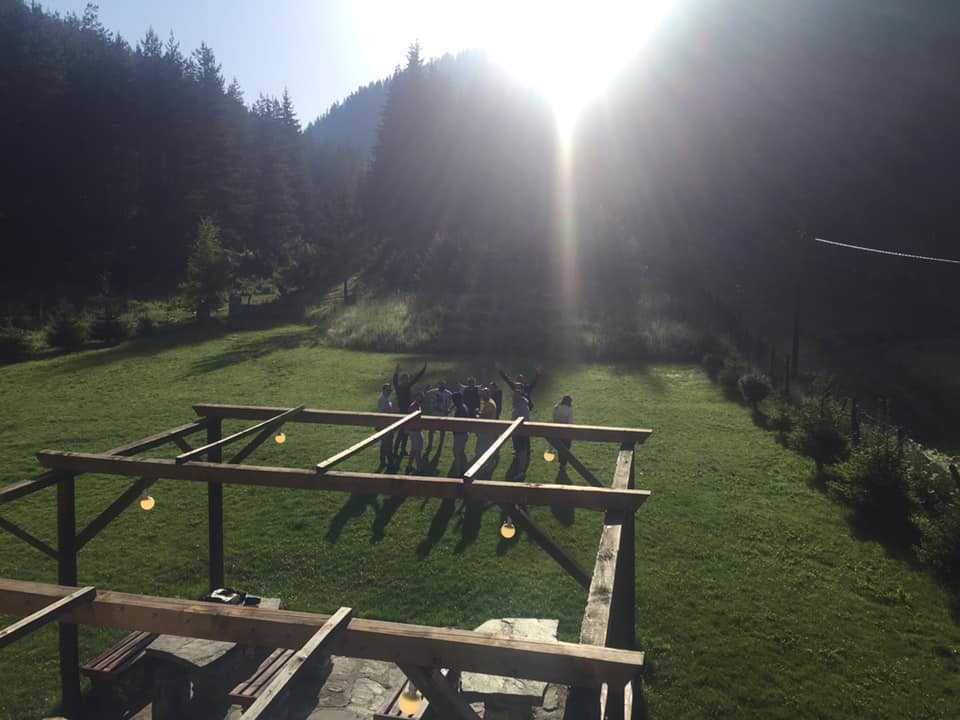 Riddles and hiking through the beautiful Trigrad

For the purposes of the upcoming game, we were randomly divided into three teams. At a common starting point, each team received one envelope with a riddle, the solution of which led to a specific destination, where a new envelope and a new riddle were waiting to be found and solved.

On this principle, we walked briskly and examined Trigrad from its inception, through the Museum of the Bear, and so on to the mysterious Devil's Throat Cave.

The game aroused the interest and sporting spirit of each of us and the team spirit quickly captured us. Helped to develop our logical thinking and build confidence in each other. In the midst of solving the various mysteries and reaching new and new starting points, we had the opportunity to explore the whole of Trigrad. The countryside was incomparably beautiful and the inhabitants of the village endlessly kind and responsive.

The final point where the teams' routes were reunited was the Devil's Throat. A kind guide was waiting for us there, who took us through the cave and told us the legends that are about her. 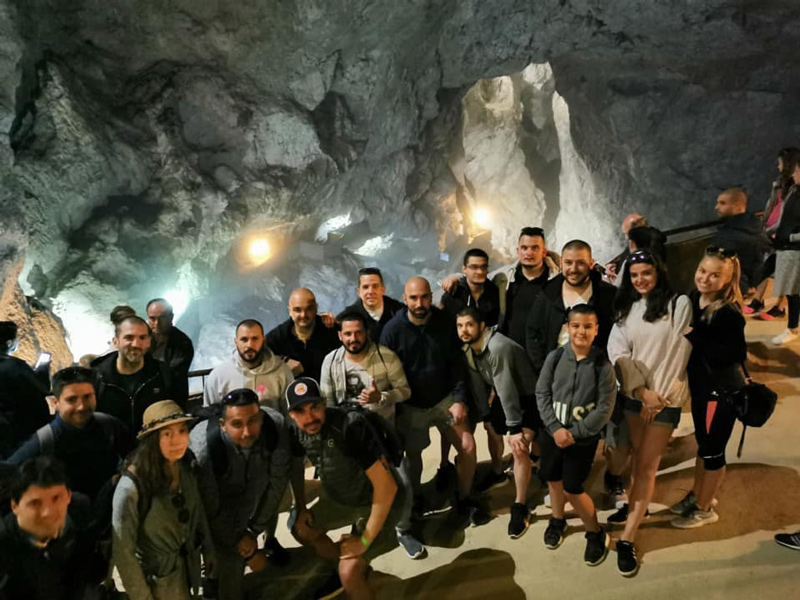 Afternoon activities and a delicious dinner

We ended the day with pleasant afternoons in the cozy hotel's backyard, such as backgammon and card games, to gather strength for the evening, when again an abundance of delicacies brought us all to the table. In the midst of the grandeur of our surrounding oasis, we forgot about everything and enjoyed real peace . After a long, emotion-filled day, traditional dishes and homemade brandy and wine made us feel more wonderful, and with them the jokes and jokes between us became even more and more fun. We quickly filled the entire tavern with laughter and fun! 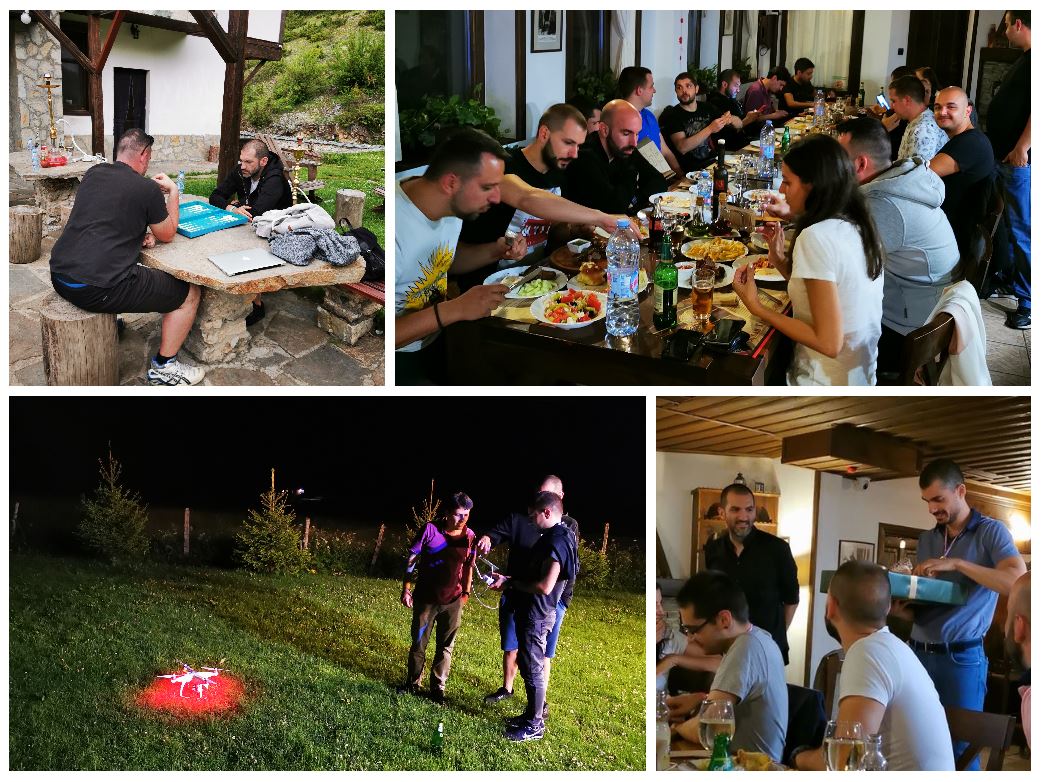 We used the pleasant atmosphere and presence of the entire dinner team to offer a humble gift to one of our partners, Dimitar, on the occasion of his birthday . We tried to stay really surprised by organizing a modest game that we pre-set so the winner would be him. We demonstrated excellent team work and he did not until recently understand what we had planned, and subsequently was left speechless of the end result.

In pleasant company and interesting activities, our time in the heart of the Western Rhodopes passed unnoticed.

The last day of our Trigrad adventure ended with a very useful and testable communication game. Again divided into three teams, the ultimate goal was to build a layout on a predefined one. The key here, however, was that the transmission of information about what the layout originally looked like was done on the principle of a "broken phone". One team member had the right to see the layout in question, to pass on the information to his teammate, who would fully pass on the resulting description to the design team people. The game proved to be extremely useful and outlined the communication within our team as a whole.

A bird's eye view of the Rhodope Mountains

As a final, we ended up with something slightly extreme and definitely unforgettable. Stefan, Niki, and Dimitar had organized for all of us jeeps to ascend to the very area of ​​Vulchi Kamak. She is known among the Western Rhodope visitors who love adventure. Legend has it that the name "Wolf Stone" comes from the wolves that gathered above the village and howled to warn him if an earthquake was ahead.

The experience was unmatched. The jeep ride itself was the perfect finish, charging us with a dose of adrenaline and waking up all our senses. However, the beauty of the view that came before us, when we got off the jeeps, cannot be compared to anything else! Words would not be enough to describe the picture that came before us. We strongly recommend anyone who has not visited the area to do so in order to see for themselves the greatness of our nature.

We announce Teambuilding 2019 as extremely emotional and loaded with positive emotions and laughter! The time we spent together in the beautiful Bulgarian nature because of our new strength and fresh ideas. We have built up our trust in each other and learned new things about each other.

More photos of our three-day experience can be viewed in the album on our Facebook page.

Maria Kisheva is currently graduating her Master's degree in International Bussines and has plenty of experience in communications and working with clients. She definds herself as positive and ambitious person. At Stenik she continiues to develop and refine her qualities and abilities.

Do not miss out on news!

Be the first who knows about our promotions! Sign up here for the newsletter!

Stenik is a golden partner of Amasty: we get priority support and lower prices

How did Aiko achieve a 50% reduction in online processing time?