The key to Stenik's growth and stability over the years is that management is made up of the company's partners. Stefan, Nikolay and Dimitar are keen to keep up with the actions of the team and actively engage in communication with customers.

A Human Being at Stenik

A decade ago Stefan Chorbanov started STENIK jointly with his student Nikolay Dimitrov. Today he still works hard every day together with his co-workers on projects for STENIK’s key accounts.

With his partners, he made STENIK a leading web-agency developing internet stores in Bulgaria and building eCommerce experience with accounts such as Orange Center, KFC, Ozone and many more. As a hobby, over the past 4 years he has developed his own online stores. This helps him learn from experience not only as a developer but also as trader, an expertise that is not owned by many.

Dimitаr Dimitrov joined STENIK as a partner in 2006 and has been responsible for attracting new customers ever since.

His experience gathered through the closed deals for over 300 web-pages and meetings with hundreds of prospective customers gives him confidence to call himself a web-consultant. He has been involved in the development of numerous large-scale projects for important accounts such as Metro, Euromarket, HDI etc. Dimitаr’s strength is in offering consultations on the integration of online stores with ERP systems and warehouse management software applications.

Dimitаr Dimitrov graduated from the НТБГ and the New Bulgarian University. 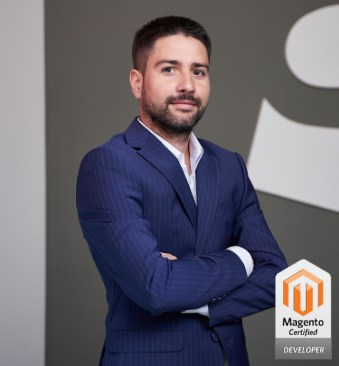 From co-founder and chief developer to Chief Technology Officer – this is Nikolay Dimitrov’s career path at STENIK. He was also the main driver behind STENIK’s expansion to the German market and the company’s partnership with nwebs GbR.

Nikolay is a true guru of PHP programming, the Magneto e-commerce platform, the TYPO3 content management system, all kinds of web services and of linking websites and online stores to different ERP systems, … but most of all he is the king of Linux servers.

Nikolay has a degree in economics from  Karlsruhe University,Germany.